In the field of telecommunications, we focus on MIMO communication systems.
As shown in the figure below, a Multiple Input Multiple Output (MIMO) channel considers antenna arrays at the transmitter (TX) and at the receiver (RX). Due to the spatial configuration of the antenna arrays, it is possible to take the spatial domain into account in order to obtain an improved exploitation of the frequency spectrum.

Digital communications, either voice, messaging, video or other media content, have become an essential part of the modern society. Consequently, the demand for advanced digital communication systems is increasing. Currently, mobile networks have a total of 7.3 billion subscriptions worldwide, from which 1.4 billion belong to the latest fourth generation (4G) network. In 2022, 8.9 billion subscriptions are expected, being 4.3 billion for 4G. Moreover, applications that require a high throughput such as virtual reality (VR) are also foreseen. The communication systems should also fit increasing demands of machine to machine communications, including Internet of things (IoT) and vehicular ad hoc networks (VANETs), such as vehicle to vehicle (V2V) and vehicle to infrastructure (V2I) communications. To support this demand, a 100-fold increase in data rate is being considered as a requirement for future fifth generation (5G) standards, whose deployment starts as early as 2020.

One of the key technologies to allow for a better exploitation of the scarce spectrum is the incorporation of antenna arrays into communication devices. One of the main topics on antenna arrays is beamforming that are techniques that can virtually adapt the irradiation pattern of the antenna array based device to amplify the signals from a desired direction and to cancel out the interference from other angles. Therefore, beamforming provides the spatial separation of multiple sources sharing the same spectrum band, and can also be applied to mitigate jamming and radio interference. An Illustration can be seen in Figure 1 where weights are applied to each antenna to virtually adapt the power towards a desired direction and mitigate signals from another.

Figure 1 – An illustration of a simple beamformer

In the LASP, we develop beamforming techniques and frameworks to deal with colored noise scenarios, uniform rectangular arrays (URA) and broadband scenarios are developed. For colored noise scenarios, prewhitening techniques and rank reduction techniques can be used. For the URA and the broadband scenarios, we adopt a tensor notation for a more natural modelling and more efficient processing. For broad band scenarios, the parallel factor analysis (PARAFAC) tensor decomposition can used along with frequency invariant beamformers (FIBs), where a FIB is a broadband beamformer that has an invariant spatial response along a frequency band as shown in Figure 2. 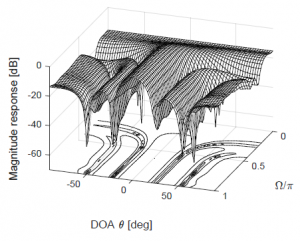 The LASP seeks for efficient techniques capable of dealing with the high number of antennas required for future systems. Naturally, these systems demand a high computational cost. The studies conducted at the LASP aim the reduction of computational costs while maintaining or increasing the original performance levels.